The 92nd Academy Awards will premiere Feb. 9  at 8 Mountain Standard Time. For the second year in a row, the Oscars will have no host, a change that resulted from controversial tweets made last year by comedian Kevin Hart, who was expected to host. Instead, this year will have “presenters” with big names such as Keanu Reeves, Will Ferrell, Lin-Manuel Miranda, Brie Larson, Spike Lee, and many more. The ceremony will also include musical performances by Randy Newman, Elton John, Billie Eilish, and others. Along with this, the ceremony will have a special tribute to the late Kobe Bryant, and others who died in the helicopter accident on Jan. 27.

In a series of strong contenders, maybe the strongest in a while, it seems clear that the most coveted award will go to Sam Mendes’s “1917”. The film follows two young British soldiers in WW1 tasked to call off an impending attack that is doomed to fail, by crossing into enemy German lines. “1917” stars George MacKay and Dean-Charles Chapman in its main roles, but has many other recognizable British actors including Benedict Cumberbatch. “1917” seems to be a classic story of war, filled with action, explosions, and heartbreak, but under the surface it offers a lot more. The movie is a “shingle shot”, meaning through clever and hidden cuts, the movie is a two hour sequence that follows the characters in real time. Mendes and legendary cinematographer Roger Deakins worked tirelessly to set the film up. “1917” is a breath of fresh air and takes big strides for the future of filmmaking. Couple this with the movie already winning Best Picture at the Golden Globes, and it is evident that “1917” has a very strong chance to take home the award.

Predicted: Quentin Tarantino (“Once Upon a Time in Hollywood”)

In his 10th movie (or ninth depending on whether you count “Kill Bill: Vol 1 and 2” as a single movie), Tarantino sets another precedent for directing, and as such, it is likely he will take home the award for Best Director. Tarantino’s “Once Upon a Time in Hollywood” is based in 1969 Los Angeles, and follows actor Rick Dalton (Leonardo DiCaprio) and his stunt double Cliff Booth (Brad Pitt) on a wild ride through the ups and downs of a dying Hollywood actor and much more. It is hard to wrap up Tarantino’s movie into a single sentence as it flies from one plot point to the next, even ending with a reimagined scenario of Charles Manson’s cult famous murders of actress Sharon Tate, and director, Wojciech Frykowski. Quentin’s style of breaking conventional film norms is back for this movie, with a fuzzy plot, oddly placed narration, and a weird “Bruce Lee” cameo. Tarantino is a people’s favorite, and with a win for Best Director at the Golden Globes already under his belt, he looks to snag his first Oscar.

For anyone that has seen the already cult-classic, “Joker”, it is clear that Joaquin Phoenix is the only contender for Best Actor. “Joker” follows the mentally unstable Arthur Fleck on his long and twisted road to becoming the infamous clown prince of crime, Joker. Playing the Joker is a sought after role, after many greats have played or voiced him in the past, including Heath Ledger, Jack Nicholson, and Mark Hamill. Phoenix joins that list, losing almost 52 pounds for the role and giving a performance so stunning, you question whether the actor himself is going to start fighting Batman. Phoenix won a Golden Globe for best actor in a drama, and plenty of other awards including a best actor win by the Denver Film Critics Society. A controversy surrounded the movie before the nominations went up, as it faced severe backlash for its possible “pro-violence” tones, but due to its nominations in several categories, it seems the Oscar committee is not factoring this in. Jaoquin Phoenix for “Joker” is looking like he will be laughing his way straight to his acceptance speech. 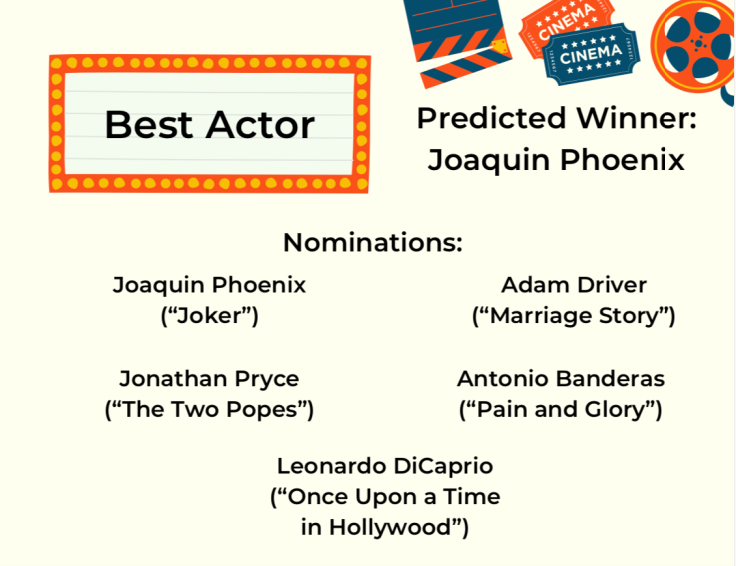 Scarlett Johansson, best known for her roles in the Marvel movies as Black Widow, made a surprising switch to drama in her latest film ‘Marriage Story’. The Netflix original, also starring Adam Driver, better known as Kylo Ren from the new Star Wars, follows the two through a messy divorce. Scarlett Johansson gives the performance her all, and it is hard not to feel an emotional connection to her character. Netflix movies have not fared well in the past, including the sad loss of Best Picture to last year’s ‘Roma’. But this year Netflix seems to be pushing forward, and it is very likely that Scarlett Johansson will start a career in drama after winning Best Actress.

There was an error retrieving images from Instagram. An attempt will be remade in a few minutes.